Over/Under: What Your Toilet Paper Roll Says About You 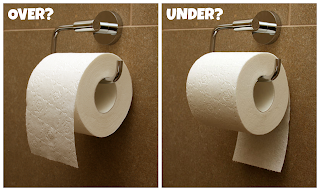 So, what does your toilet paper preference say about you? Those who like theirs "under" are more easy-going and relaxed. You don't let the seemingly "small" things in life bother you. However, those of you who like your paper "over" may be a little more structured in your daily habits. You like to have things a certain way - a place for everything, and everything in its place. Many people who participated in Cottonelle's study even admitted that they will flip the roll over if they visit a friend or business who hangs the roll the wrong way! But it's all good. Regardless of the way you prefer your roll to hang, the important thing is the end result. It's not how you get the job done, but simply that you do get the job done.

No matter which way you prefer your toilet paper, make sure you are fully stocked. Whether you're camping in the woods or using a portable restroom at a local festival, one thing is for sure. It's better to have your toilet paper the wrong way than to have no toilet paper at all.

How Clean is Your Portable Toilet?


As they say, when you gotta go, you gotta go. Whether it be at a football tailgate or an outdoor concert, there will come a time when a porta potty is your best friend. When it comes to choosing a portable restroom or trailer, Biffs is the only one in Minnesota that you can count on to be clean. The reason is because all of our units are disinfected. When you really "gotta go", do you want to be questioning whether or not the portable toilet you are using is truly disinfected?

What a Disinfecting System Has to Offer

The idea of a portable restroom not being disinfected is enough to make anyone hold “it” until they find a real bathroom – even if it’s a bathroom at a gas station. Biffs is the only portable restroom company in Minnesota to use a disinfecting system. The system itself is called Biffs Pathfinders, which is used to actually clean up the portable toilets. It simplifies the job and minimizes repetitive labor.

Some of the benefits to using the disinfecting system are that it: 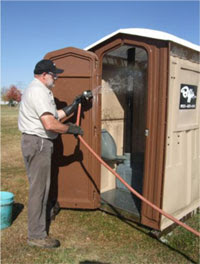 When there is a clean and truly disinfected portable restroom, customers are happier. Biffs Pathfinders can actually reduce bacteria by 56% in comparison to traditional cleaning methods. Additionally, it can reduce mold by 132% - meaning it’s designed to be a significantly better way of cleaning portable toilets – and it’s a great way to advertise to patrons.

Portable toilets may be all that you have to offer customers – and this means that you need to make sure customers are happy. It may not be the case that your customers will visit you again just because of your portable toilets, but it’s certainly a way to add to the overall experience.

Biffs Pathfinders is the original portable restroom disinfecting system and works to reduce the number of hours cleaning, the number of steps to clean and the possibility of workplace accidents. Portable toilets need to be cleaned properly. What you may currently be getting could be filled with bacteria, mold, and foul odors – and it doesn’t have to be that way. Biffs is the premium portable toilet supplier that uses a disinfecting system that will truly disinfect porta potties.

The History of Toilet Paper


Joseph Gayetty is a man you’ve likely never heard of, but he is the person you should thank every time you go to flush. Gayetty did not invent toilet paper, per se, but he is responsible for making it commercially available to the masses. If it were not for him, we would still be wiping with – well, there are a few things people have used through the ages. 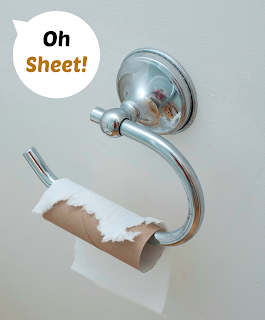 In the days before toilet paper, or even paper as we know it, was invented, people took care of business in a variety of ways. Of course leaves, grass and furs would be natural choices to use. How about mussel shells, though? Perfect for scooping, when wiping just won’t do.
In Rome, sponges on a stick were the preferred utensil. Just rinse them off with a little salt water, and they’re ready for the next person! Who cares about hygiene anyway, when everyone’s taking a bath together?
In the dry regions of the Middle East, where sea sponges were hard to come by, people just used their left hand. No wonder it’s still considered unclean to this day.

In the 14th century, someone in China had a brilliant idea. An unknown person introduced the Chinese emperor to toilet paper, and we can only assume the emperor treated him favorably from that day on. Conveniently, sheets were 2 feet by 3 feet, which let them double as a pillow case if not used.
By the time people started moving West, Americans caught onto this idea of using paper. On the frontier, corn cobs still had to be used at times when paper was scarce. The Sears Catalogue and Farmer’s Almanac were favored over nature’s supplies, though.

Since Gayetty made toilet paper commercially available in 1857, there have been a few innovations. It was put on rolls and perforated in 1877, and by 1935 people finally could get splinter-free toilet paper. Thankfully, today it is found in virtually every modern restroom – even portable restrooms! There is no need to bring your own paper, even when portable toilets will be the only ones available.