A Brief History of the Portable Toilet


You might not realize this, but the next time you make use of a porta potty, you're going to be sitting on more than three thousand years of history. Portable toilets go back to the days of ancient Egypt, as hard as that may be to believe. Of course, they weren't always made of blue plastic. Join us as we take a portable restroom through time to learn the history of the porta potty!

The first porta-potties, as far as we can tell, were invented in Ancient Egypt and consisted of a stool with a clay pot underneath. These porta-johns were frequently used by high ranking officials, with whom they were frequently buried, just in case nature called in the afterlife.

Eventually, in the Middle Ages, we would see the most famous form of ancient porta-johns – the chamber pot. Chamber pots were usually simple metal pots that you could do your business into and then simply pour out the window when you had the chance. If you wanted to class it up a bit, you could also get hold of a glass chamber pot... Lord knows why you would want to, but that option was available. 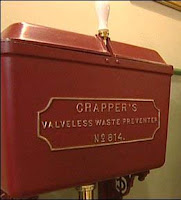 The first portable toilets to look more like the modern porta potty finally showed up in World War I, when soldiers would relieve themselves in portable water closets marked "T. Crapper" for Thomas Crapper, plumber and inventor of the modern toilet.

At this point we might want to take a moment to point out that we are not making this up.
Outhouses, common throughout history and still found in some rural areas, are technically portable, though not totally. Typically an outhouse is placed over a hole in the ground, and when that hole fills up, dirt is thrown on it and the outhouse is moved over a few feet. If you're willing to dig a new hole every time you want to set your toilet up, then you could technically call this a portable toilet.

In Long Beach, California in the 1940's, wooden portable toilets finally showed up allowing dock workers to stay close to the job. These simple toilets were basically wooden portable closets with a seat and a drain in the bottom.

Finally, modern plastics made the porta potty a possibility. Lightweight polyethylene allowed for a more sanitary, slick surface that would result in toilets that could be easily transported while providing some privacy. Yes, the 1960's truly ushered in a new dawn for the portable toilet!